I made a pepper grinder 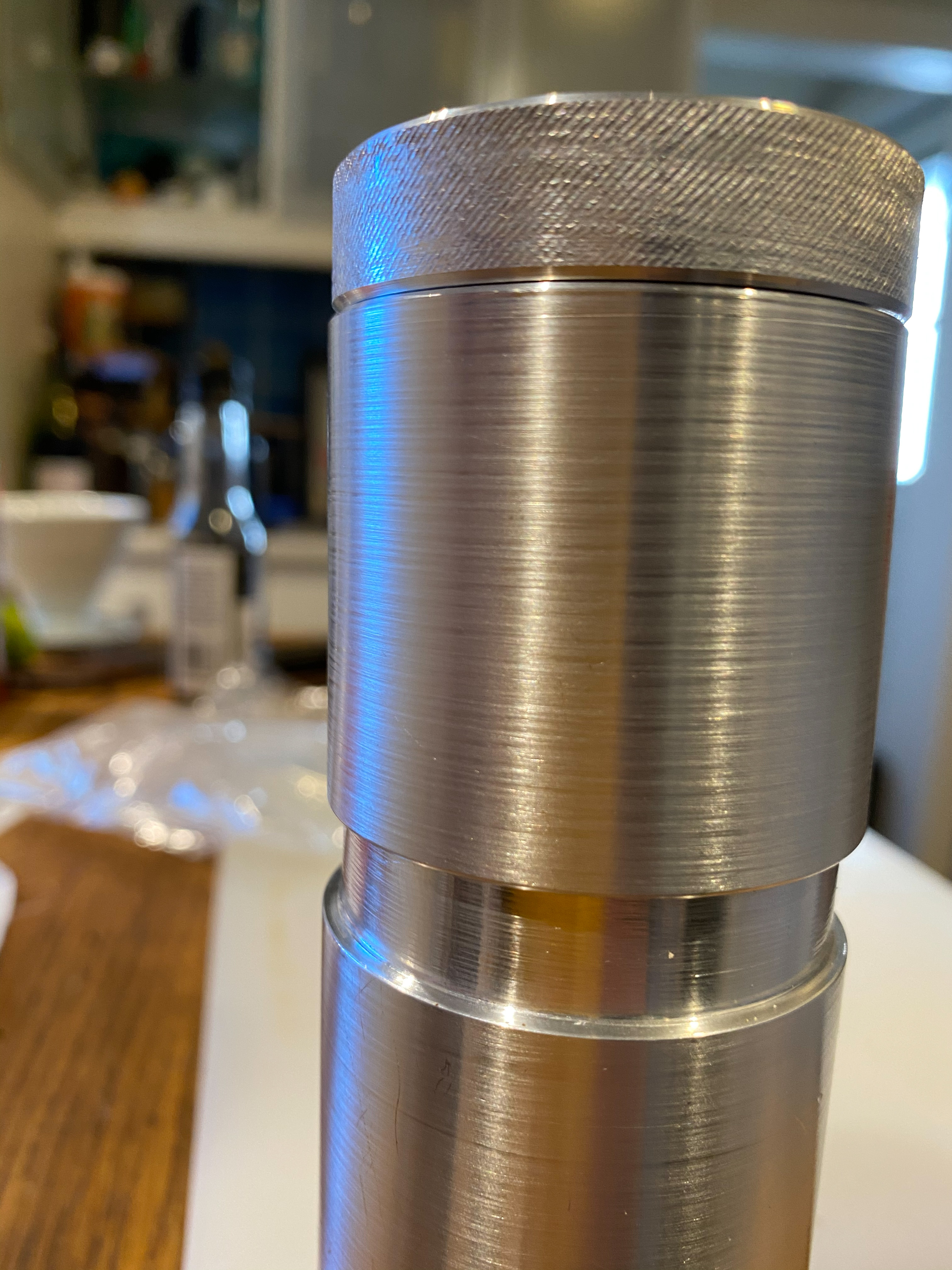 So, as some of my longtime friends know, I’m hard on my personal effects, be they the string of watches I wear, the cameras I carry, my bikes, my tools, my phone, laptops, everything. This extends to the kitchen, where the average life of a glass is about a year. Pots and pans tend to be a little banged up, before I switched to aeropress I was always needing a new glass carafe for my french press coffee. Damn I miss french press sometimes. Anyway.

I’ve also been through a number of pepper grinders, the last of which was both really nice (consistent, ground pepper quickly, needed no batteries) and not so nice (plastic) and broke after only a few months. I took it apart and looked at it, and saw that I could replace all the plastic parts with aluminum, quickly mocked up a design in my head, and bought some material to turn the parts on the lathe. I also did a repair on the plastic, to keep us in fresh ground pepper in the mean time. 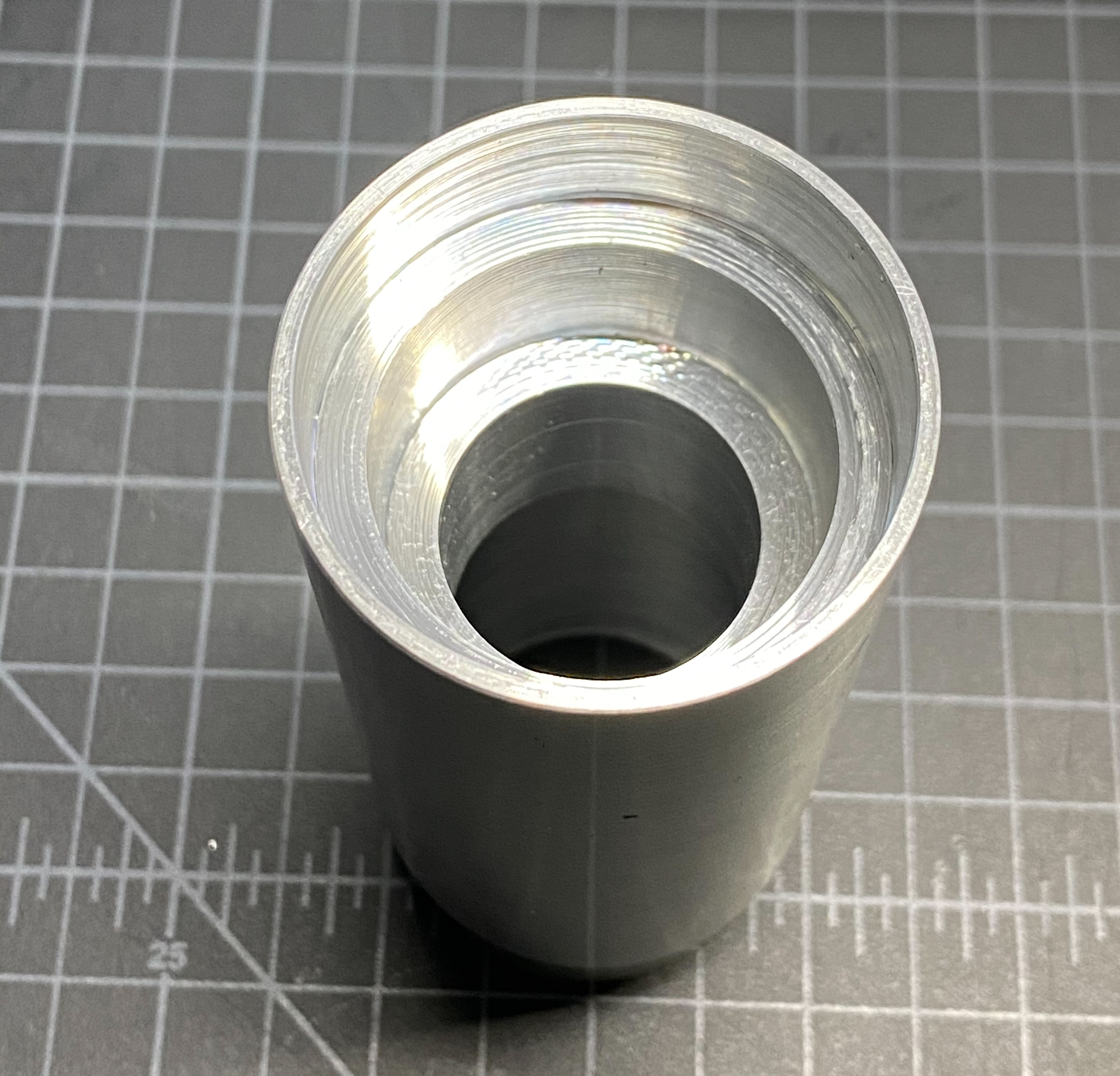 Fast forward a month. I’ve got all the tooling I think I need, and I’m in the shower, thinking through the kinda complex design I came up with initially. It had two flanges, a main body, and a cap, and I didn’t know exactly how the shaft that connected the burrs to the top would connect. The flanges would have required cutting a bunch of internal and external threads, and just a lot more work in general. And then, there in the shower, I realize: I can just weld a little threaded rod to the end of the shaft, and then not need all the complicated extra flanges; the cap could just spin on the main body and be held in place with nuts above and below. 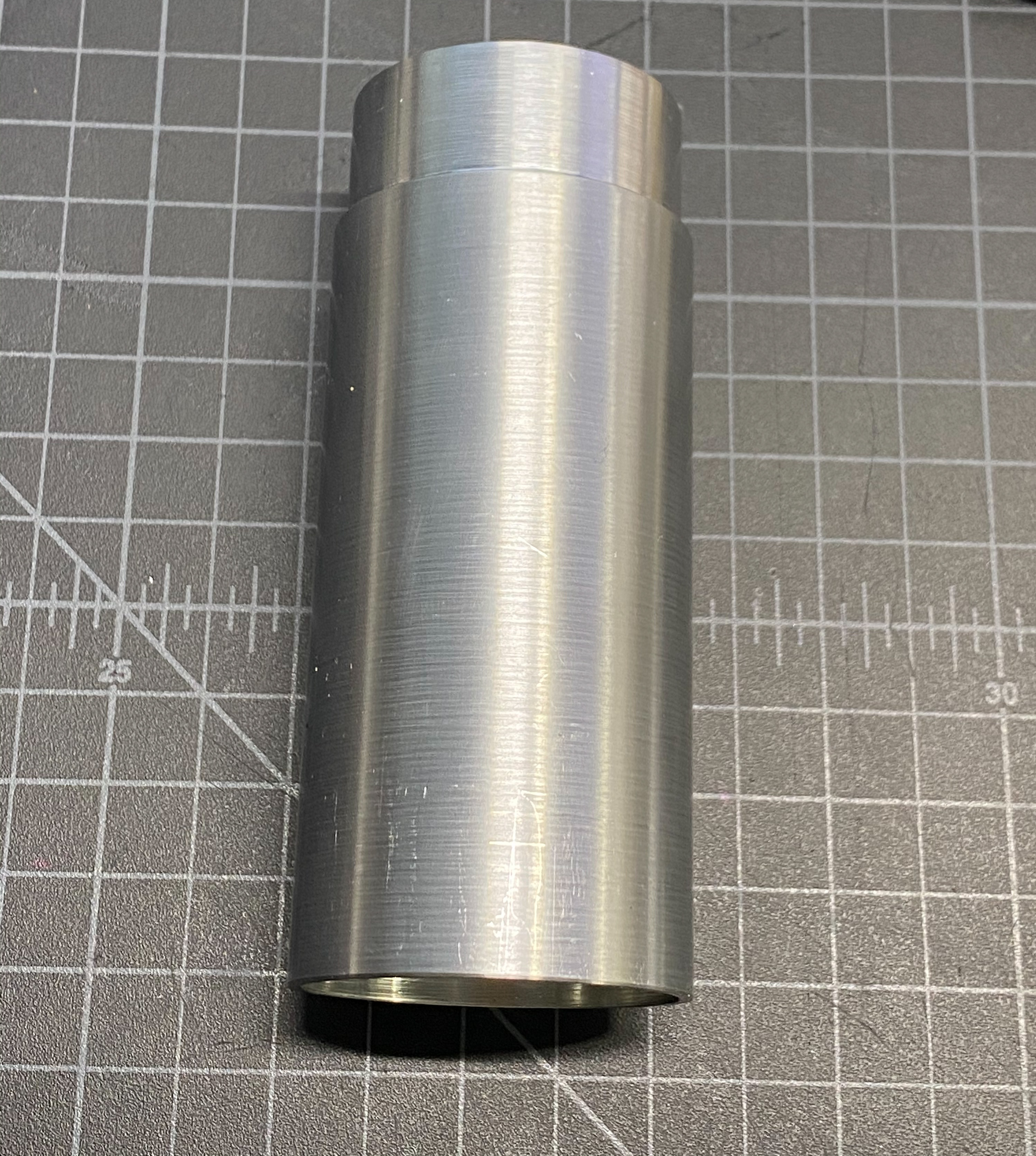 So, even if you can’t understand my description, you can kinda see that the second one is a lot simpler. It was simple enough I was confident I could make it. That same day, I started cutting material. I cut the main body out, drilling and then boring out to 1.5” about half way down my work piece. I also cut the little shoulder on the top that the cap rides on. Then, I parted off at the right length, flipped the part with a soda can shim over the finished surface, and started boring the bottom.

Innuendo aside, it was a pretty straightforward process. I had to cut a succession of steps, one to hold the outside of the steel burrs I had, and one to hold the little adjuster bar that was from the bottom of the old mill. In the middle of all this, I ordered a better boring bar from littlemachineshop.com (which I love, because they always have good quality import tools), which made the second side and the cap a lot easier.

Then, a minor disaster: I wanted to hurry up and finish, so I was rushing through cutting the cap out. Got the initial work done, but my parting blade wasn’t cooperating, so I decided to cut it with my band saw and then face it. My parting is pretty bad, I usually have to face the parts after anyway. Facing means making a cut perpendicular to the axis of rotation, on the end of the spinning part, often to clean up a cut made some other way.

So I take it out of the lathe, put it in the vice, and start cutting it with the saw. The band saw is balky and doesn’t like the 2” round. Rushing, not getting things in position, etc. Also, at this point, it’s midnight, so I’m tired and making dumb mistakes. The blade pops out, I put it back in, keep sawing. finally, the part comes off. 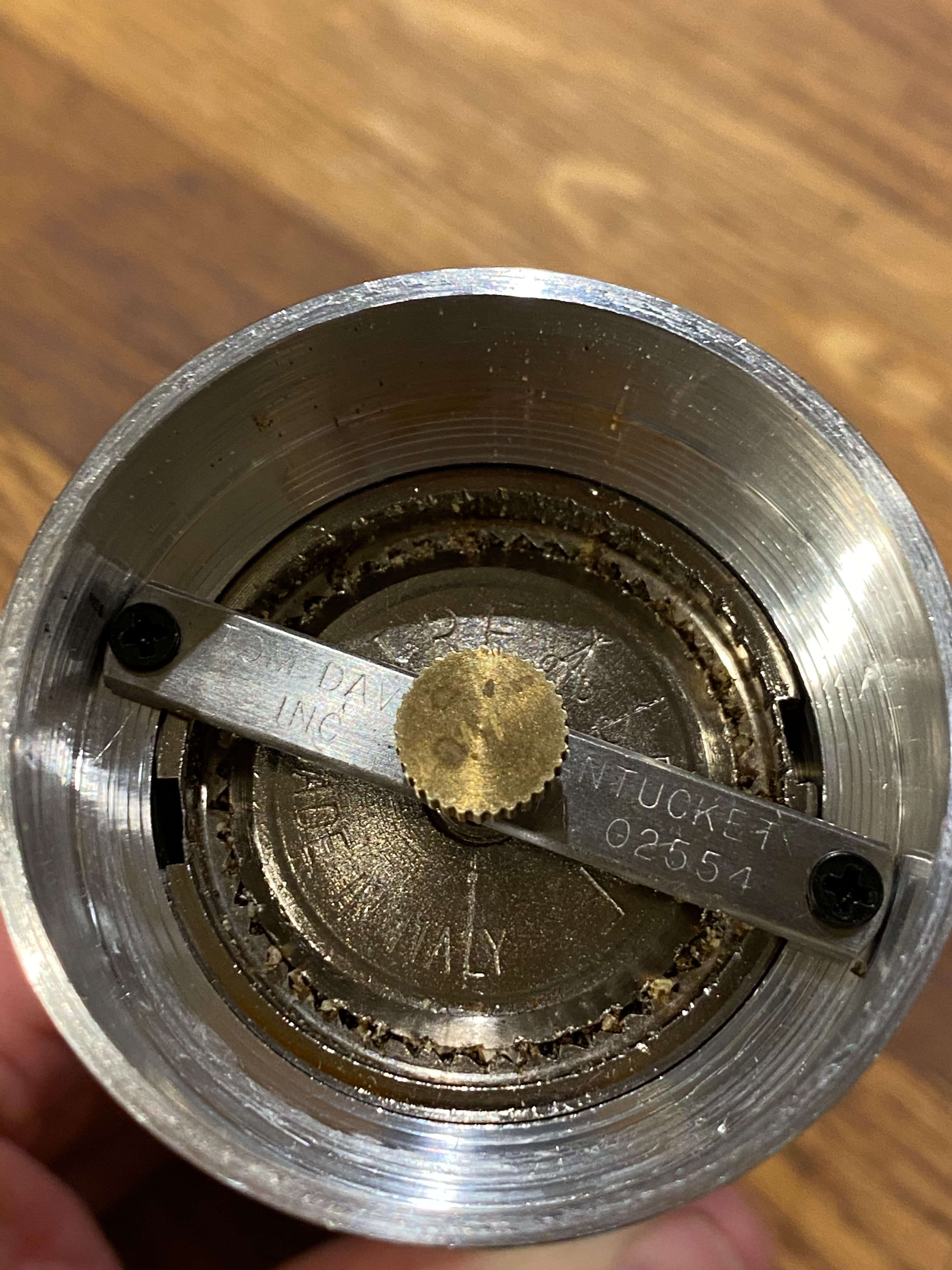 I take it back over to the lathe and start to cut. It’s really rough; almost immediately, the part snags, and because I’m only holding the thin side, it’s ripped out of the jaws, and ends up in the chip tray (the metal that comes off from machining operations is called chips; the chip tray collects some of them; much of machining is dealing with chips). The part is bent, ruined. I give up for the night.

The next day, on lunch, I start cutting on a new lid. I have just enough material, and at least the drilling parts of the work only take maybe 20 minutes. That evening, I get the boring and parting done, flip it, carefully true it up, and face it off without incident.

Then, finally, I was ready to assemble it. I was a little surprised that it went together on the first try. Everything fit; all my measurements had been within tolerance, and after a quick washing, I loaded it up with pepper. Works great, doubles as a bludgeon. Very tough. 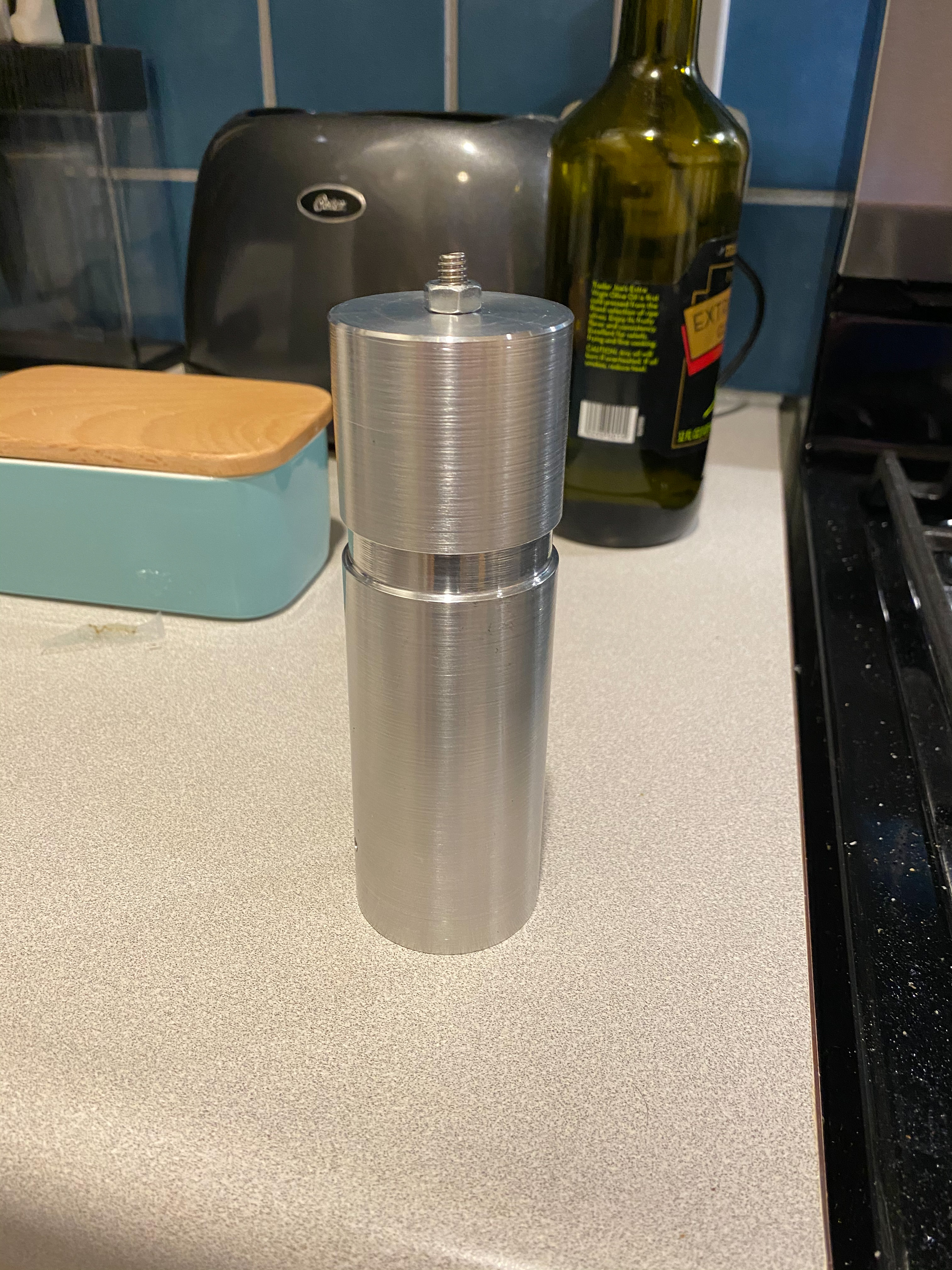 The next day (today, the day I’m writing this, I looked at the simple nut on the top, and decided it would be better if it were a bigger sort of knob (the technical term is “thumb nut”), that could be operated without tools. So I went back down to the lathe and made one in about 25 miuntes. And that’s the grinder we have now. Hopefully I won’t break this one, but if I do, I can fix it. 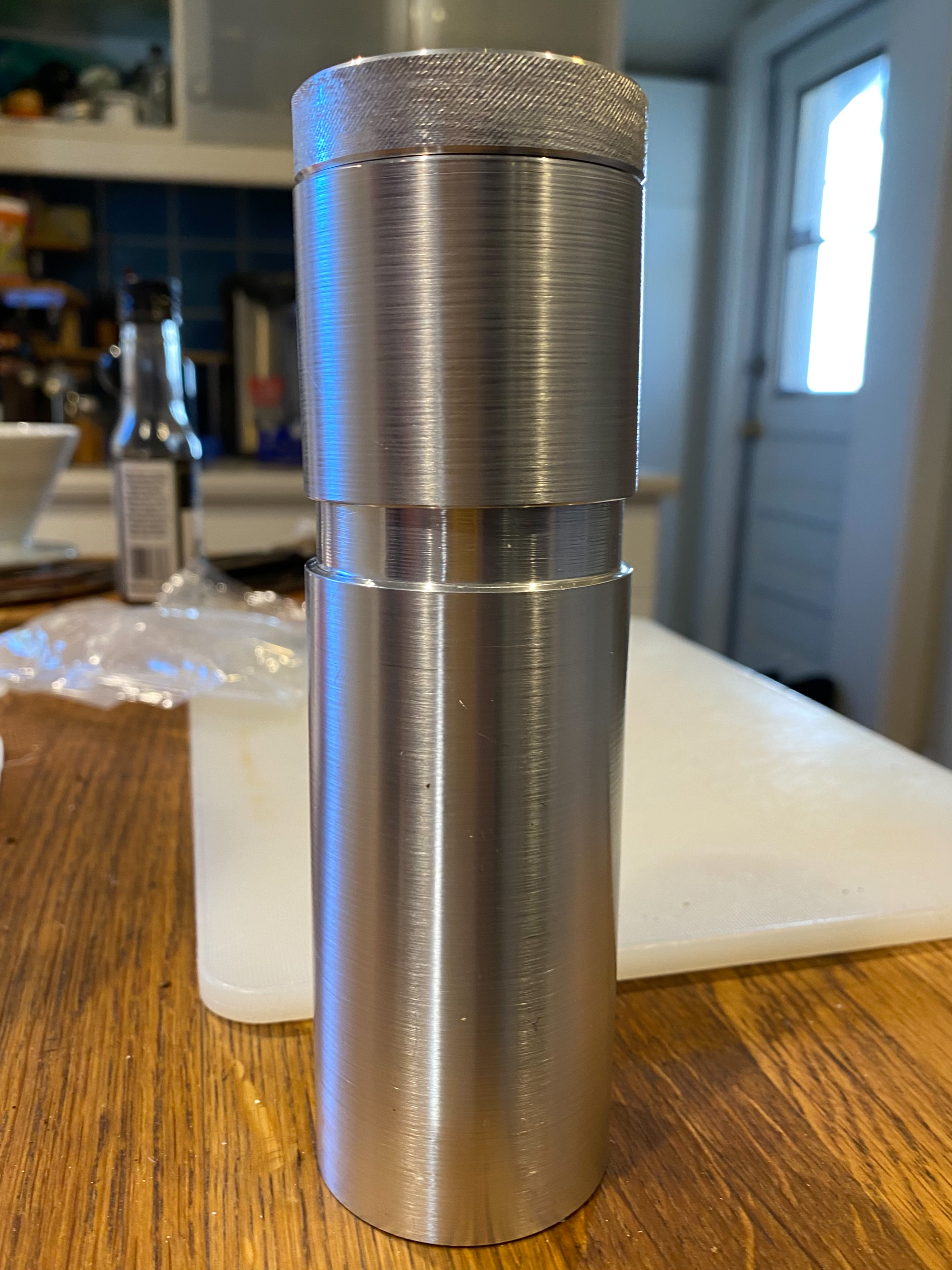