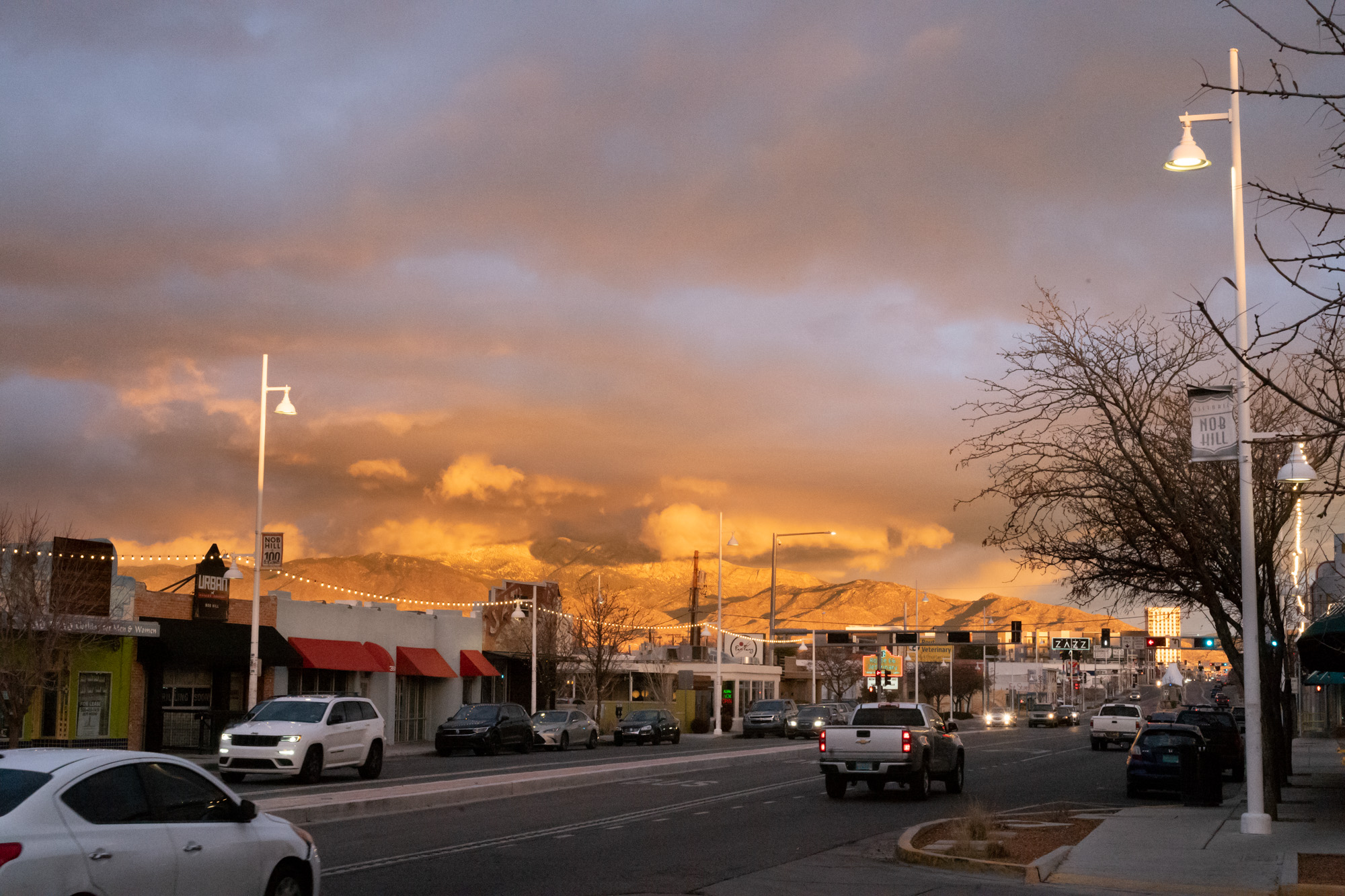 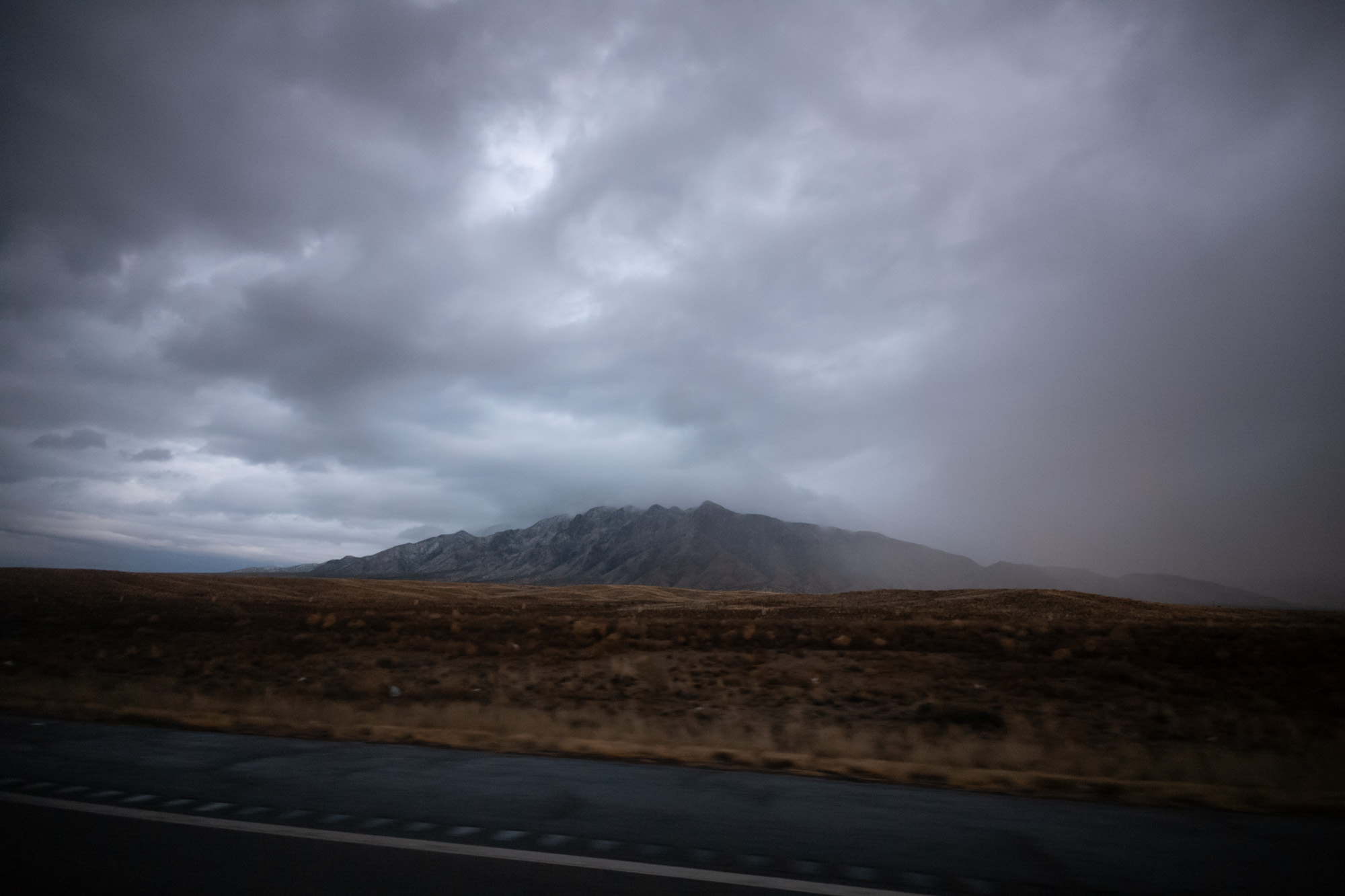 I might be a little bit nuts. Last week, I went on a trip, my favorite kind of trip. Fly to Albuquerque, get picked up, ride to santa fe, sleep six hours, pick up a rental car, drive to oklahoma. Sleep 7 hours, hang out with my Dad for the first time in a year. Hang out with my friend KJ, also first time in at least a year. Sleep four hours. Drive to texas, stop in a rest area and sleep half an hour. Drive the rest of the way back to Santa Fe, arriving after the rental car place closes. Go sleep for 8 hours, return the rental car key, have breakfast, drive to abq again, get on a plane, and fly home. if that sounds like a whirlwind, it definitely was. I spent more time in transit in those five days than I did sleeping, and at least 17 hours driving. 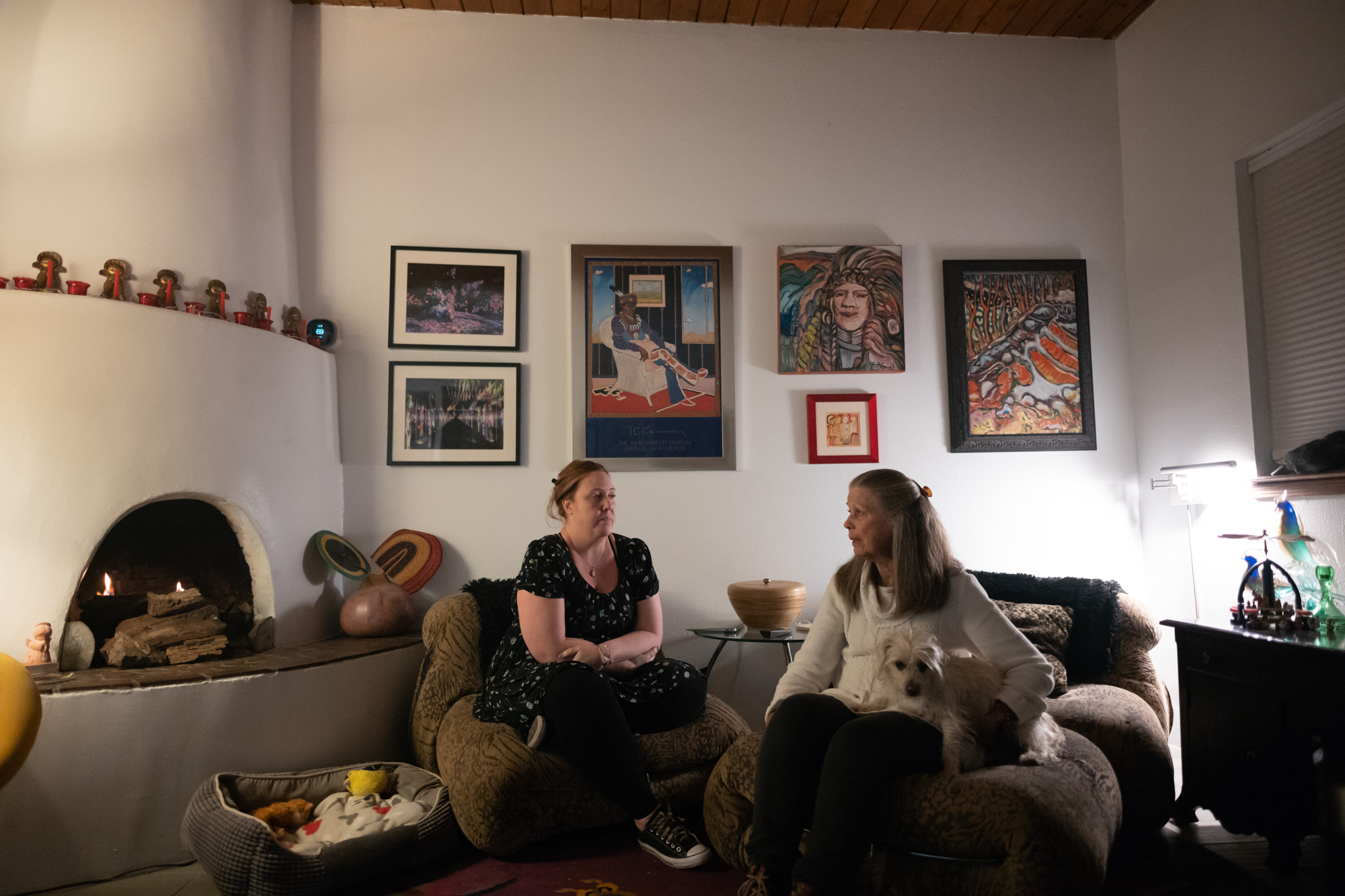 A normal person would have thought ‘three days in santa fe, great! I can have all the green chile breakfast burritos I want.’ Me, though, I thought, ‘huh, that’s only an 8 hour drive from OKC, I can get a car and see people there too.’ 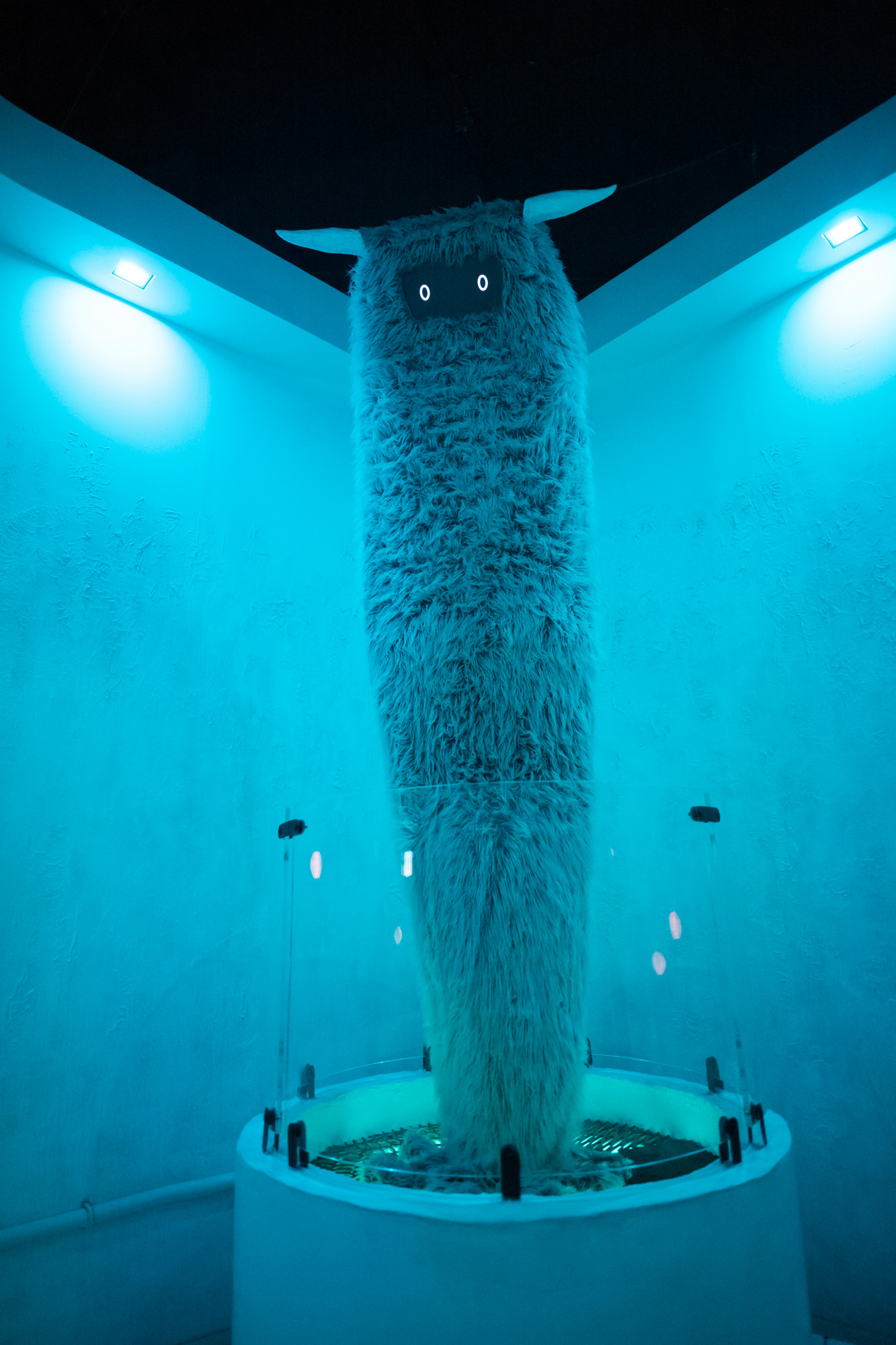 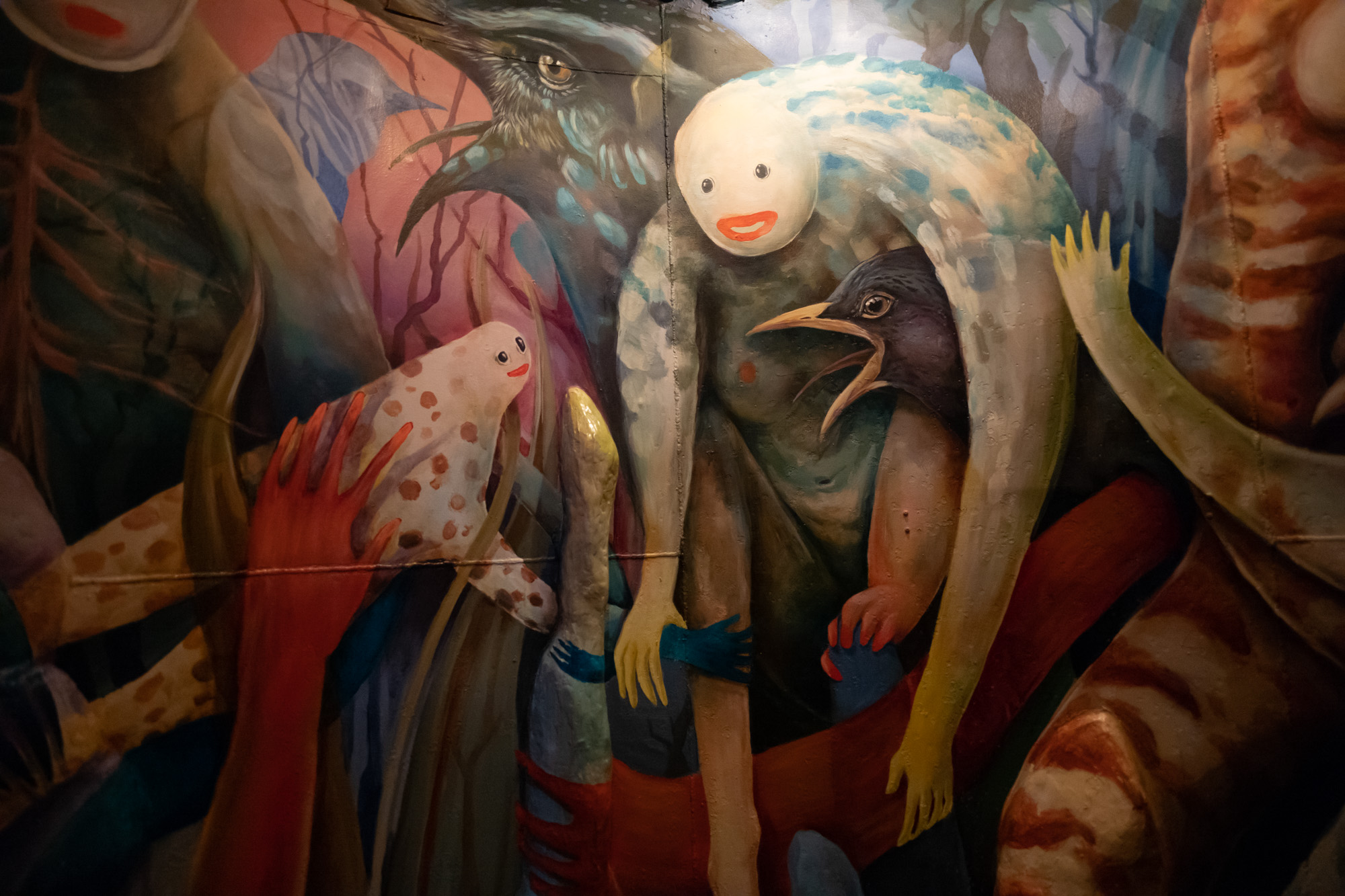 On the drive east, I was thinking of it as “Matt’s Quixotic Adventure” because, firstly, there are a lot of windmills in eastern new mexico and the texas panhandle, which I learned is called the llano estacado, and not a lot besides that. There are signs for the big steak in Amarillo, roadside attractions, and one large cross. A lot of cows in one spot, and a lot of grass (the brown kind you don’t smoke). If you’re lucky, there are good clouds; sometimes, if you’re luckier, you’ll see herds of antelope on the western edge of the Llano. 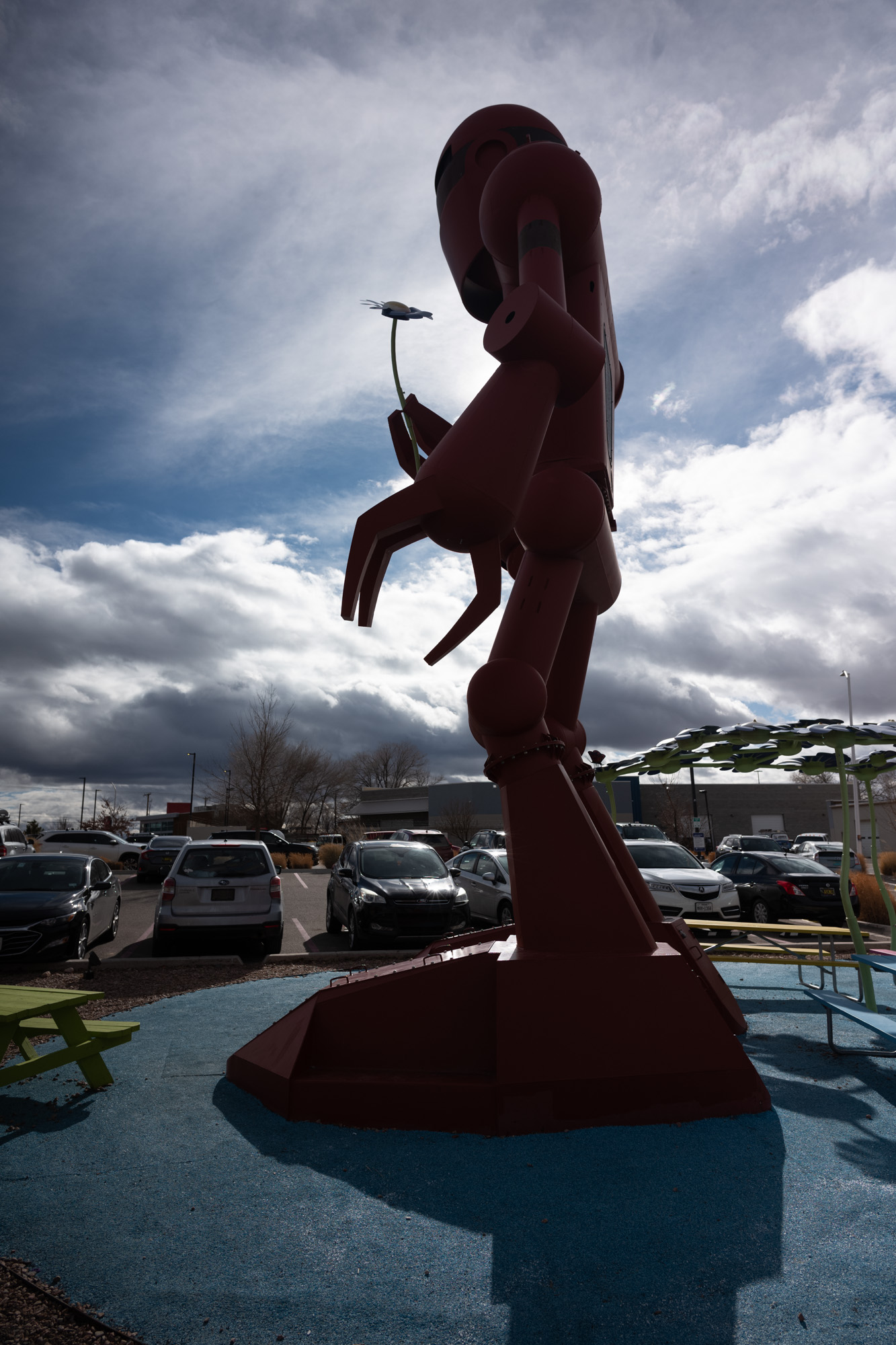 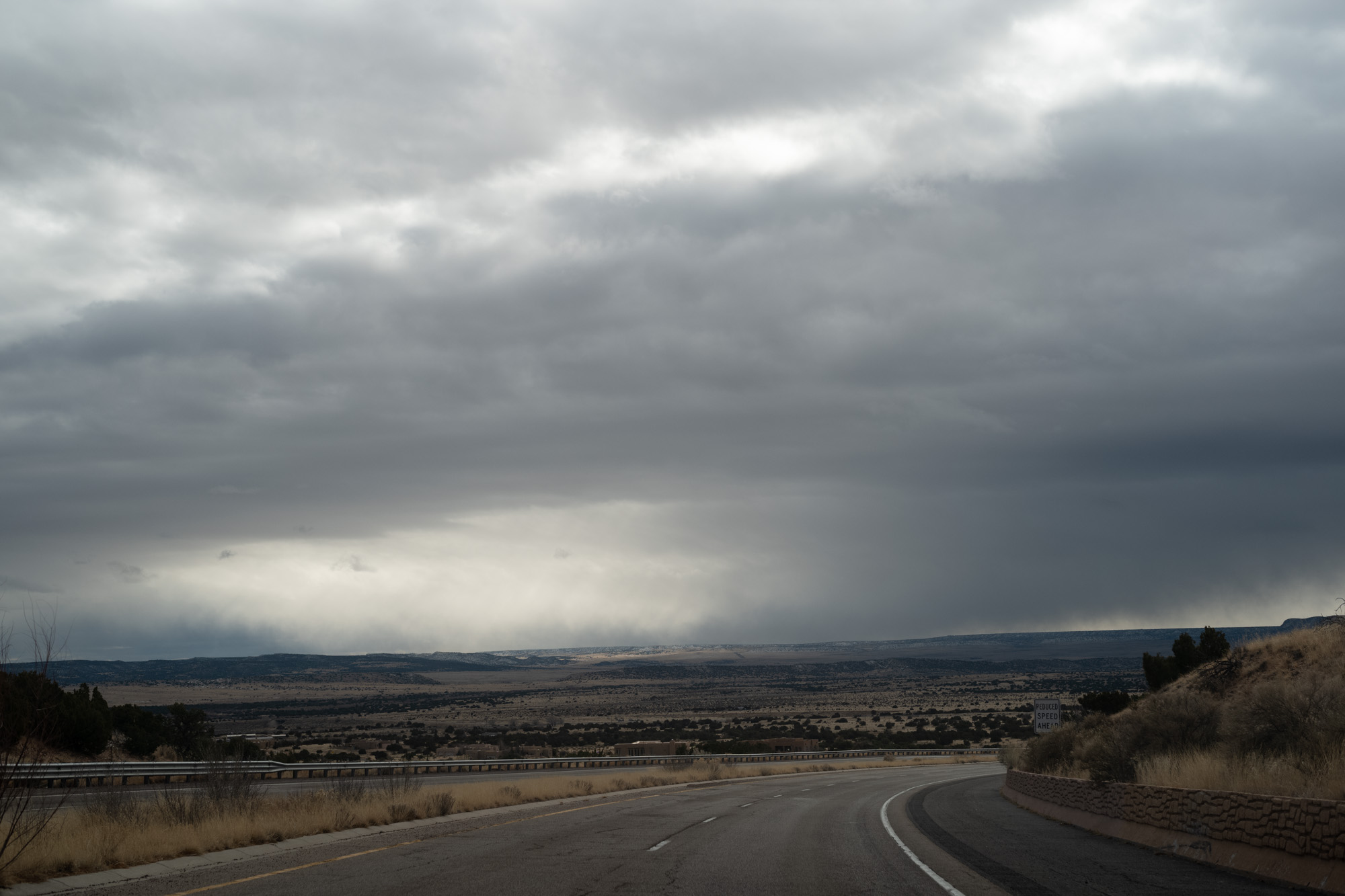 Also, COVID ruined a bunch of our travel plans last year. Our visit to Oklahoma City to see relatives for 2021/2022 Winter break was marred by a couple different exposures that meant I didn’t get to see anyone we’d come to see. Sophie was a little luckier, but only because we saw her family on day one of the trip, outside, on an unseasonably warm day. Then, this last thanksgiving, Sophie’s mom got COVID and had to cancel her trip out to see us. So this trip (5 days start to finish) was to make up for all that and see everyone for at least a few hours. 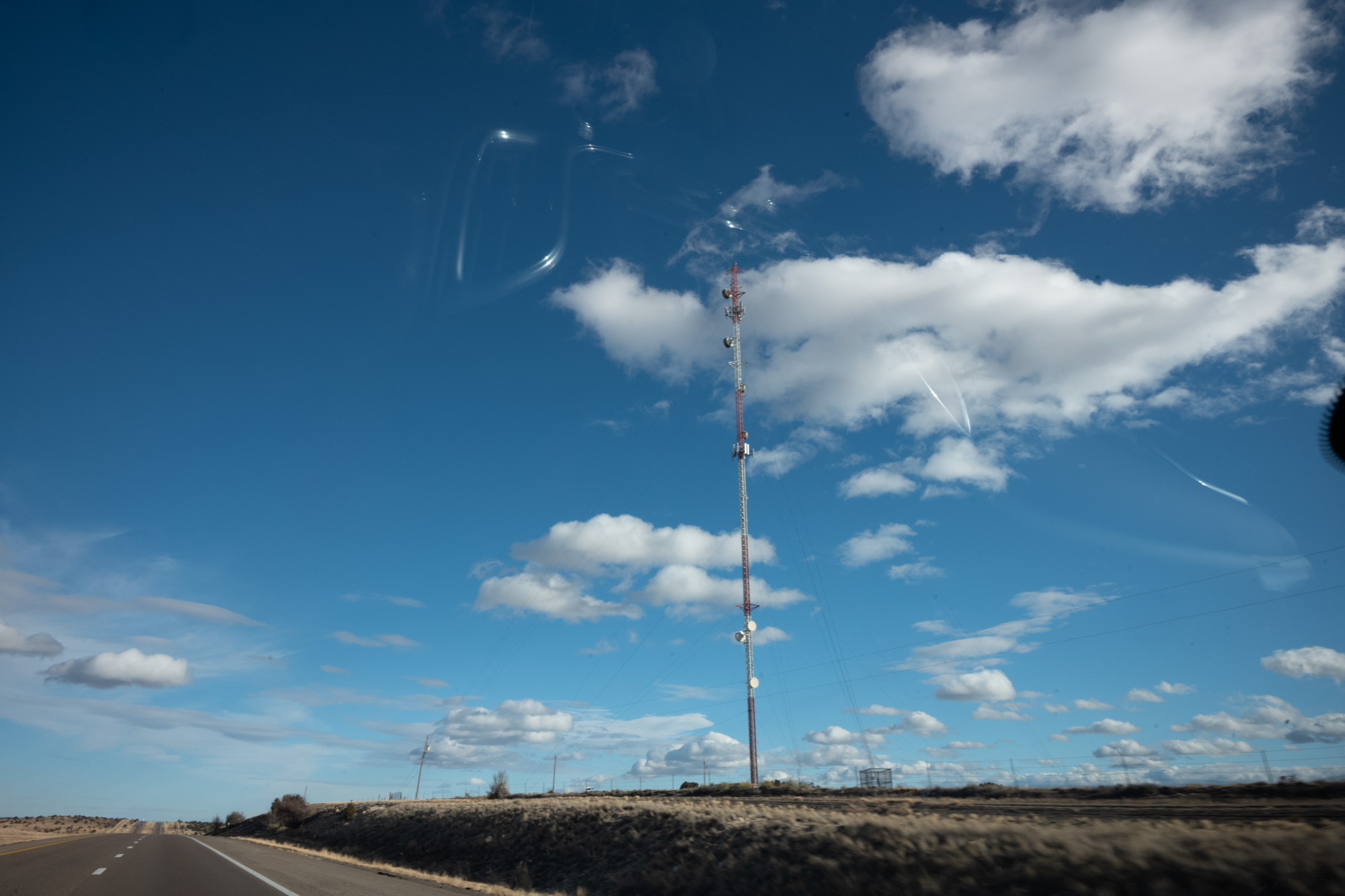 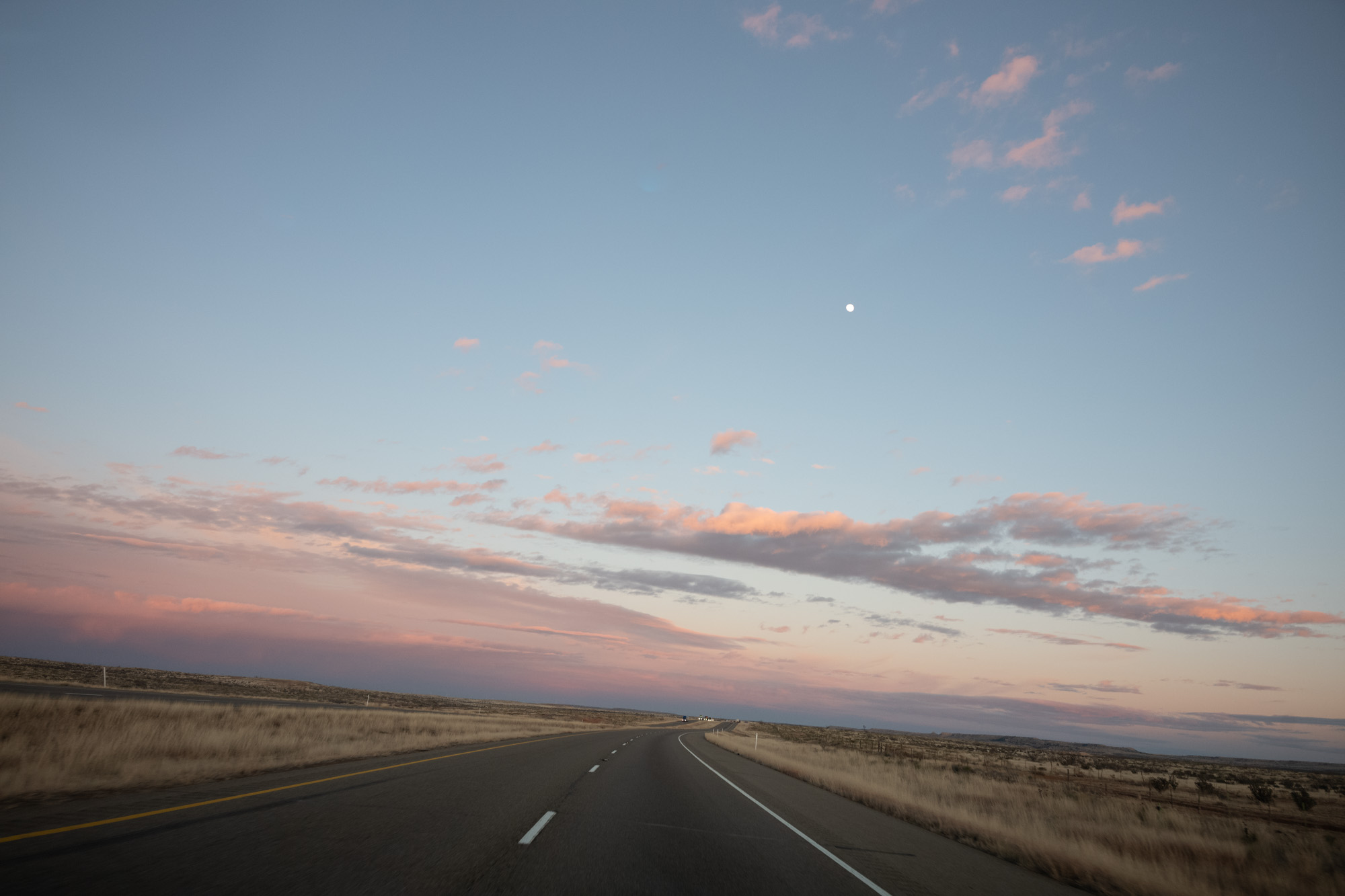 But something else about this trip appealed to me, and that’s the very thin margins it operated on. This occurred to me on the drive west, as I was leaving Oklahoma City on four hours’ sleep. The whole trip was like a Rube Goldberg machine, where if everything goes just right, there aren’t any problems and it’s sort of amazing to see the toast get buttered or whatever at the end of all the steps. 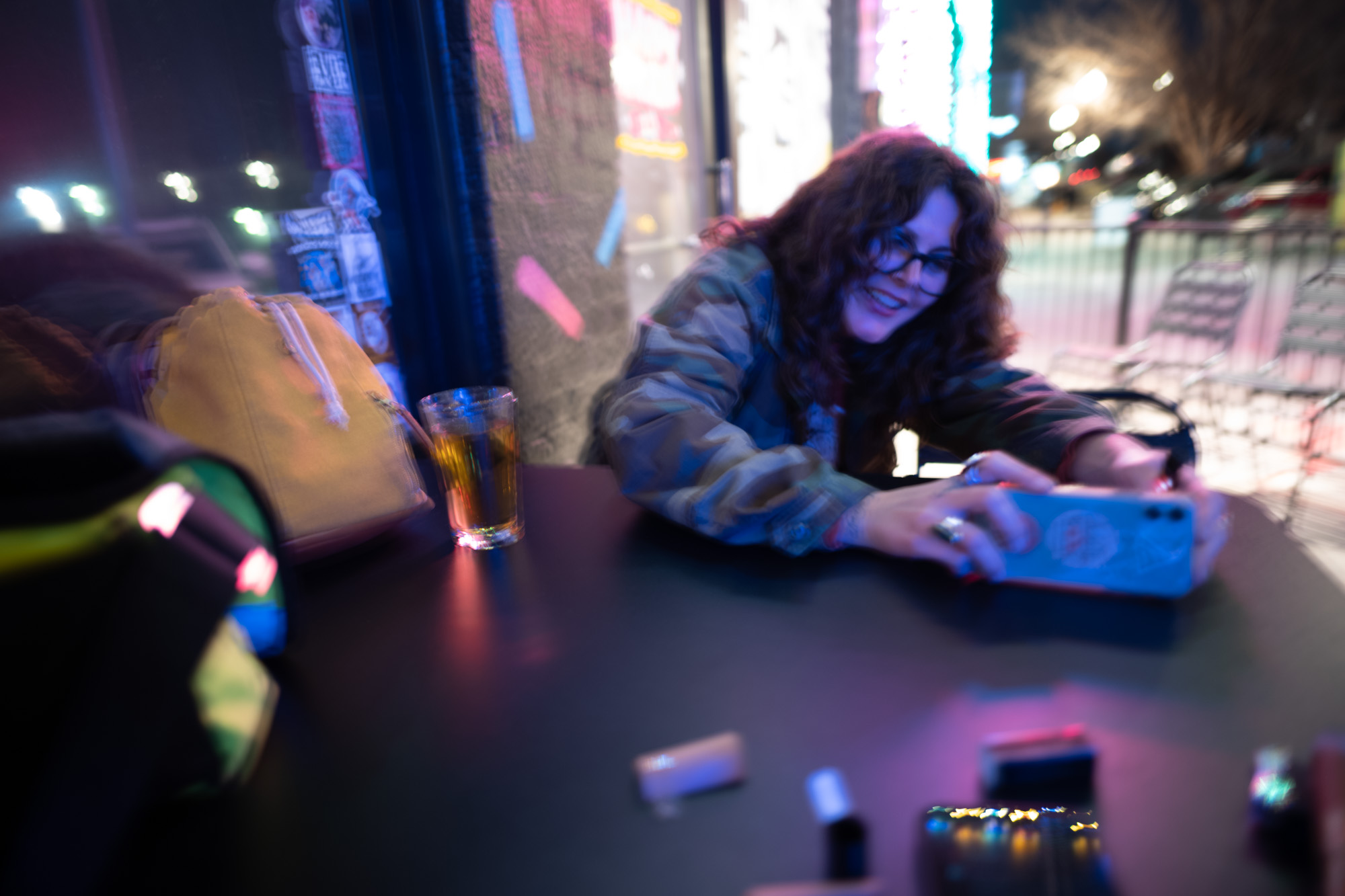 What actually happened was there was a drift away from the plan, minute by minute. For example, the second day, I got the car and then went to Meow Wolf with Sophie, dropped her off at her mom’s place, then got on the road maybe half an hour later than I wanted to. That drive was pretty uneventful; good clouds, a nice sunset (see pictures). I lost an hour when I crossed the border into Texas (because time zones). Smooth sailing and I got to my Dad’s house around 11:30pm instead of 10. I sat in the living room for a minute, and after we talked for just a minute, he said, “Oh, you’re that tired, let’s just go to bed,” and I was so exhausted I just did. 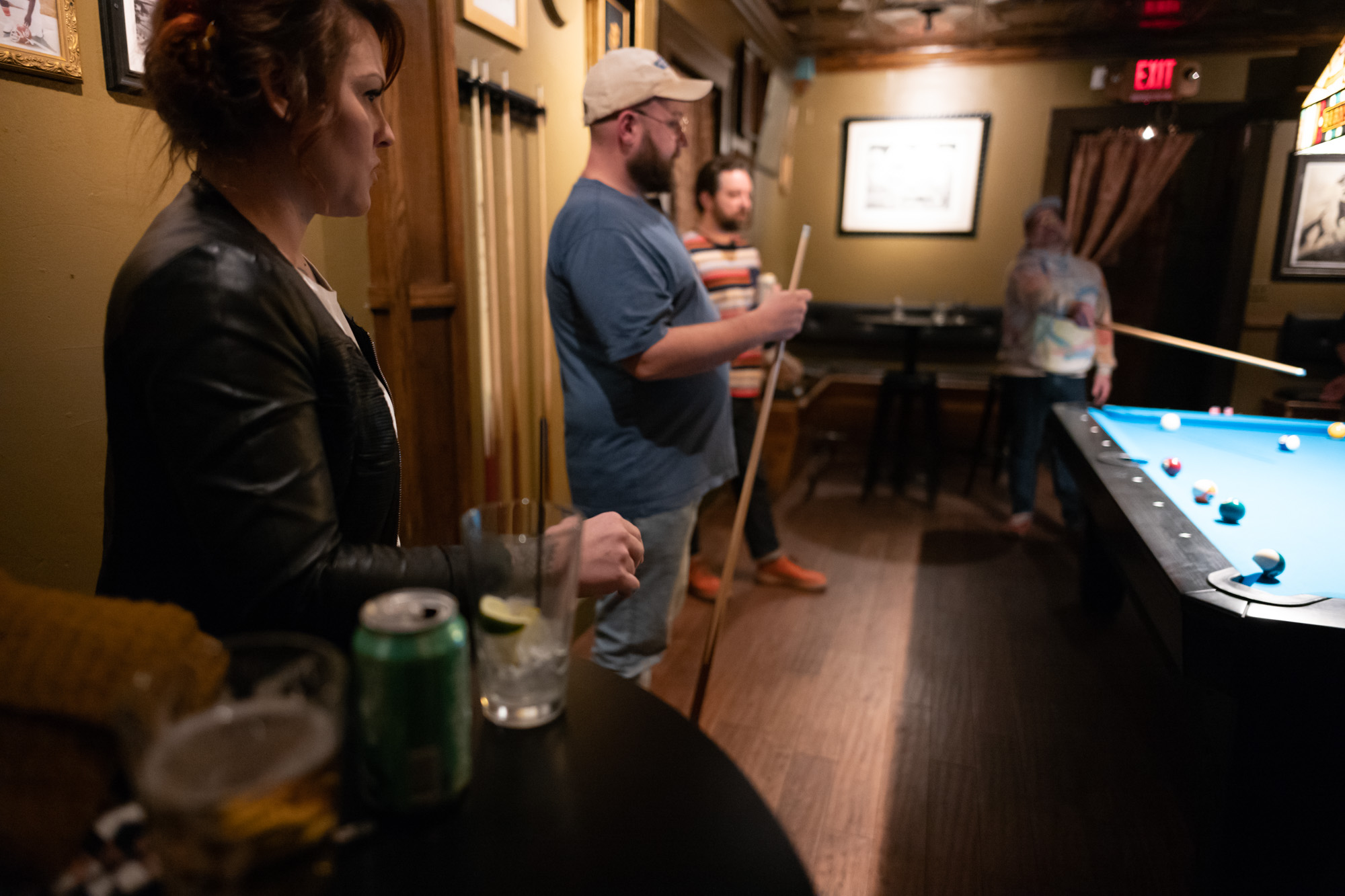 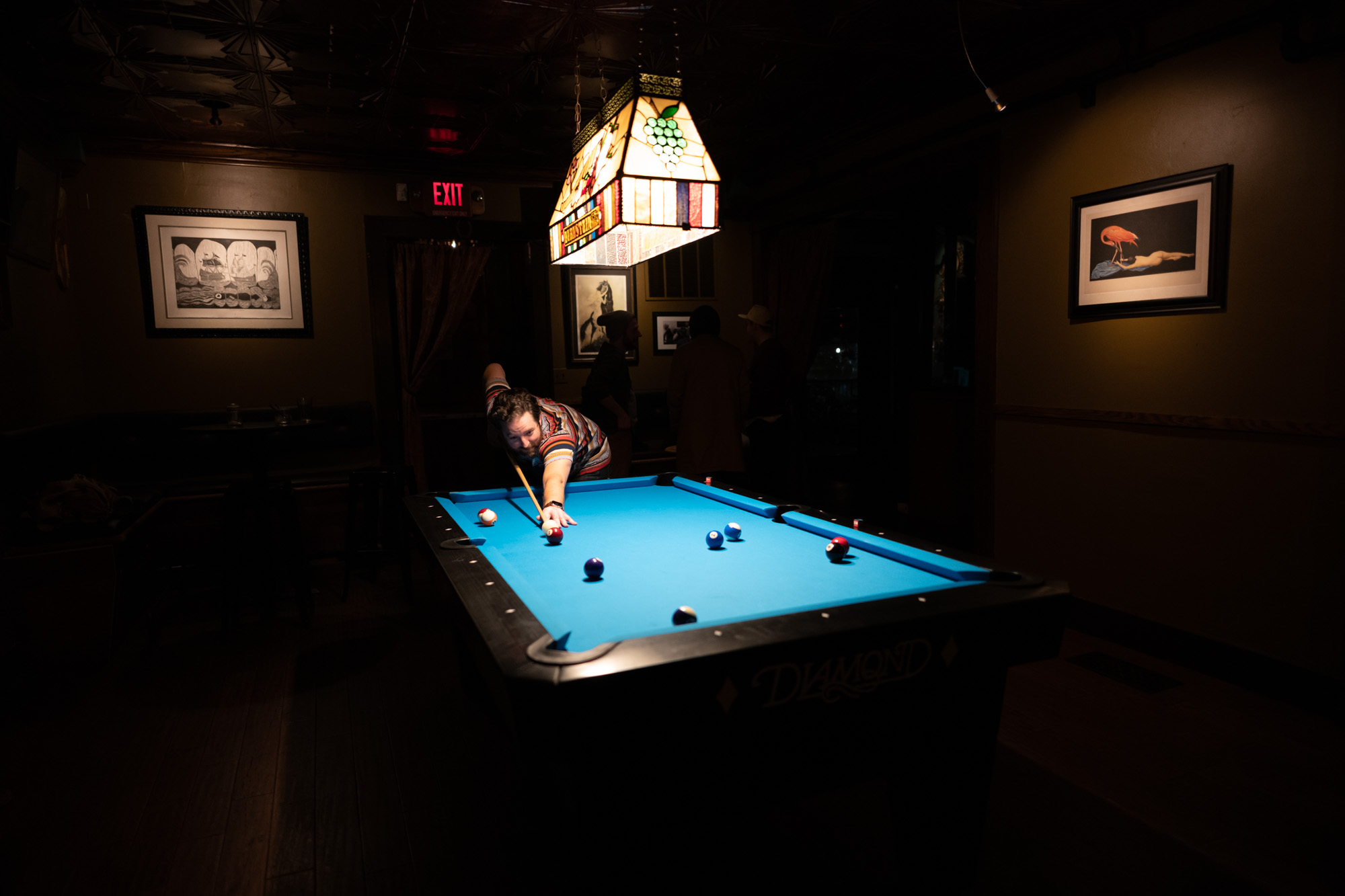 Before I know it, it’s 36 hours later and I’m back out at the edge of what’s possible, driving into the night, vents blowing cold air, tense from all the adrenaline metabolites and cortisol and caffeine and b vitamins and whatever the hell ‘taurine’ is. 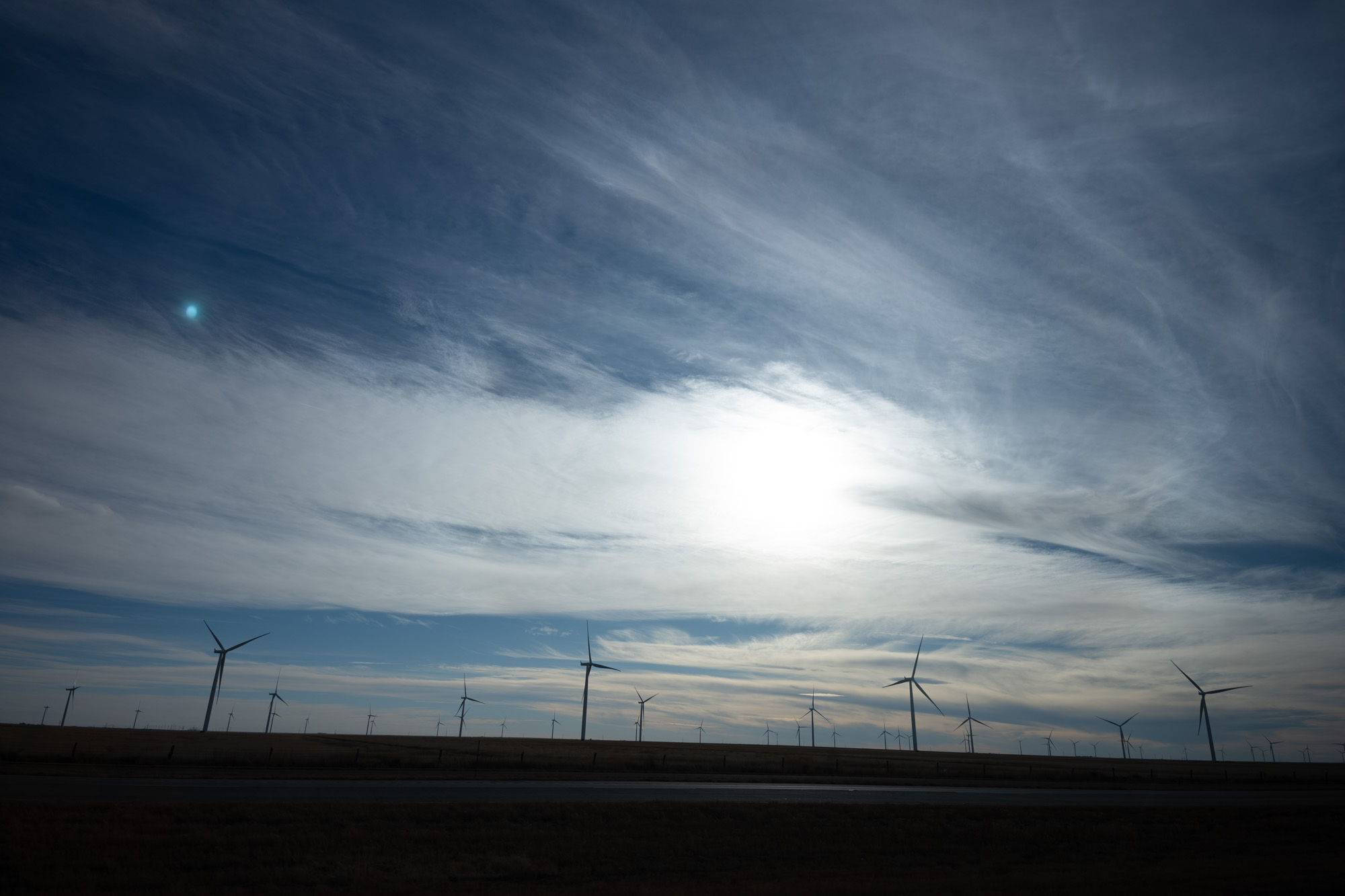 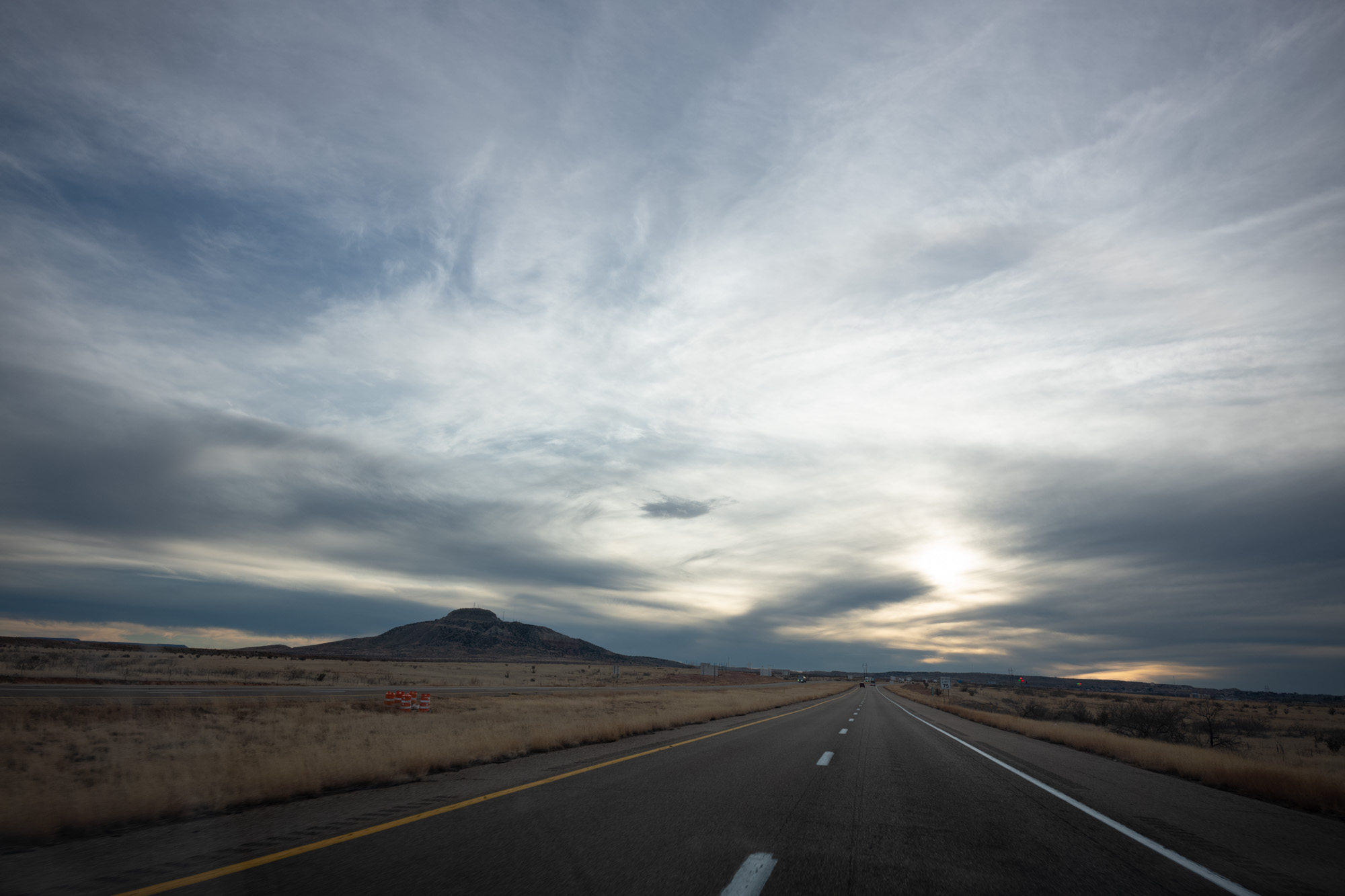 It’s not a good place to be, but it’s a place I feel at home. I’m fully aware of how silly it is. The silliness is part of what appeals to me, too. I could easily have planned a trip that had more days in it (except I don’t have more time off to use), but something about adding those extra margins, padding for safety, would have removed all the fun. Well, not all the fun, because the parts where I got to see family and friends were the point of the trip and fun in and of themselves, but adding that extra edge just makes the time I had with them a little bit brighter. Feels sharper, somehow. It’s not to see if I’m ‘up to the challenge’ or anything macho, it’s just to see what happens. The edges are where the interesting things happen, after all.